Avon, one of the world’s leading beauty brand launches the Naturals Hair Oil– which offers the goodness of 7 Luxurious Oils. Avon also announces the stunning actress and model ‘Waluscha De Sousa’ as the face for Avon Naturals Hair Care in India. 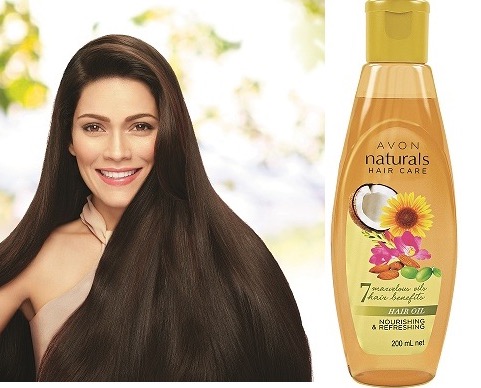 Press Release:
New Delhi, September 7th, 2016 Avon, one of the world’s leading beauty direct selling company launches the most awaited Naturals Hair Oil- which offers the goodness of 7 Luxurious Oils, for hair that is strong and healthy. AVON Naturals Hair Oil not only restores your hair’s natural shine and replenishes the lost nourishment, the 7 LUXURIOUS OILS offer a specific and targeted benefit to give you lustrous and strong hair.

The stunning actress and model who has graced the covers of many magazines, recently also received accolades for her role as the leading lady in “FAN”. Waluscha is the perfect embodiment of beauty with brains, and is a role model for most women who aspire to break stereotypes and make a mark for themselves.

On her association with AVON, Waluscha says, “It is an honor to be a part of a company that feels so strongly about empowering women. I am glad to be the face of a brand like AVON that is committed to not only offering innovative and quality products but at the same time making a difference to the lives of women across the globe”

Commenting on the launch of this hair oil, Waluscha De Sousa, Brand Ambassador, AVON, says, “The AVON Naturals Hair oil is a seven in one wonder. AVON as a brand stands by innovation and a promise of quality, which is evident with this wonderful formulation which brings together the goodness of not just one but seven luxurious oils, in one enriching hair oil. The non- sticky, non-greasy promise stands true, so one can bid adieu to lifeless dull hair and say hello to strong and healthy hair.”